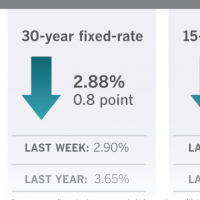 Mortgage rates are sinking close to all-time lows! The 30-year fixed-rate mortgage neared its all-time low this week, averaging 2.88%. The record low was 2.86%, set in mid-September.

The low rates are turning into a boon for the housing market. The National Association of REALTORS® reported this week that housing contract signings in August jumped 24% year over year. Pending home sales are exceeding pre-pandemic levels, with all four major regions of the U.S. posting higher sales activity.

“As a result of low mortgage rates that have stayed under 3% since July, the housing market has seen a strong, upward trajectory during a very uncertain time,” says Sam Khater, Freddie Mac’s chief economist. “We’re seeing potential home buyers who now have more purchasing power and many current homeowners who have the option to refinance their loan for a better rate. However, several factors could disrupt this activity including high home prices, low inventory, and lender capacity.”

Home prices have climbed as housing inventories remain low. NAR recently reported that the median existing-home sales price was $310,600 in August, up 11.4% compared to a year ago ($278,800).